There were concerns raised and debate held across the world on him calling it a day. But there was one reason for this announcement which many were hardly aware of. Now, to the whole world, it is publicized through this document. He had, through grapevine came to know about our team preparing for the Karting championship :) Yes. It’s obvious; a seven time F1 champion wouldn’t like to end his career with a loss. (Well it goes without saying, Schumi's fans are not reading further!!)

It was a thrilling project party everyone had been anticipating for a while. The decision to go for karting was made unanimously, the sole reason being adventure loving enthusiastic racers in the group. Experiences, good and bad in driving were widely discussed amongst ourselves with each one preparing themselves mentally fit for the race. Speed has always fascinated mankind either as a part of audience or as a contestant and was evident from wheel being his one of the first creations. The taste for success in racing has not left anyone uninterested in it which was proved by the 100% participation of the population. Those who have not even participated once in this kind of race are to be seen with pity.

A ten minute quick ride on a perpendicular from Shols junction would take you to Checkpost on ECR. Turning right, within 200m reach is Kart attack, the Go-Karting arena. The race circuit was a relatively smaller one but helped conducting a five minute race. The Kar (pronounced as ‘car’) was built in less aerodynamic style compared to F1 car, missing the basic parts of a car like gears, neck rest etc. on the whole giving a ‘comical’ look to it. The Kar had three main controls, accelerator (on the right), brake (to the left) and the steering wheel(centre). Each racer fell into one of the categories of drivers like leisure drivers, aggressive drivers, and funny drivers. While the aggressive drivers won the game, the funny drivers stole the show by their antics.

Statutory warning: Actions described below are not to be imitated on roads. Accidents guaranteed!

For most of the racers, it was their first attempt at a high speed circuit like this one. Initial research on the track statistics revealed that a skilled driver could complete 12 laps in the circuit in the five minute brakeless drive. The audiences were eagerly awaiting a memorable event ahead, betting on their favorite cars. The contestants donned skull caps and helmet over it to protect the skull and inserted themselves into the open cockpit. Cars 4,5,6,8 were positioned at the start line ready to race. The little monster roared as the engine was ignited. The flag was signaled and the race began. 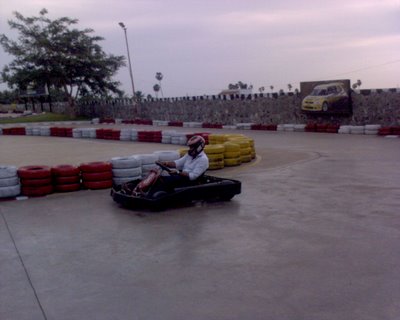 Partha, one of the finalists, stands by his name demonstrating his driving skills.

Car #8 (the funny driver) was initially taking test drives, checking the acceleration and brakes, hence made a slow start. No sooner the race started, #8 barged into the fence built on the right side of the race track and attracted three attendants for its rescue. As soon as the car was released from the fence, it bumped into the left fence keeping the three car attendants to run behind it most of the time during the race. On finding the cause for these initial hiccups, these accidents were due to the driver wearing the helmet with eyes partly hidden. :-)

At the same time, the contest was heating up due to cars #4 and #5 competing with each other driving aggressively with car #6 following them steadily. The chicanes and corners required dexterity in handling the steering. There was heavy work for the right leg compared to the left which had almost little action to do. At the second corner, driver in the car #4 braked to regulate the speed to get through the most difficult turn of the track making the car turn almost 360 degree with a noise of tyres screeching, leaving the drivers heart come out of mouth for a moment, creating a panic amongst the audience waiting for their race. By this time, car #6 took advantage of this mishap to car #4 and found it competing against car #5 which had completed its first lap successfully. Car #4 regained speed and came rushing to follow the cars ahead of it. The second lap’s first corner almost topsy turved the car #5 throwing the driver unhurt (luckily!) out of it forcefully.

The race appeared fierce in the final laps when car #6 and car #4 competed for the prized moment of winning. The car #4 cleverly gave a little leeway to other cars to overtake it. But car #6 maneuvered skillfully, sliding past car #4 and getting ahead of it to reach ahead of the attendant with a chequered flag marking the end of the race. The audience welcomed the winner by cheering and waving their hands. In the end, car #8 had completed only two full laps in the five minutes, the statistics revealed humorously.

Car 6 driver while interviewed by the local media said:

It was a remarkable day for me and the weather too played a conducive role for the contest to be held up here. It is spirit of winning and achieving that keeps me going. Thanks to the supporters for keeping my gusto alive through continuous encouragement!

The project party ended in style paying tribute to Schumacher, the racing legend. The speedster though retired from F1 has left behind many racers like us inspired.

Posted by Shrinivas at 9:17 AM

he..he..This time Shrinivas is not the fly in soup. Kindly note he is a LMV license holder!

LMV license holder was the most funniest part. it was really funny. i was laughing out loud on the funny driver.