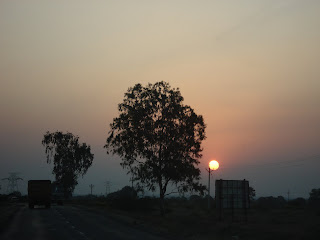 Racing up with the sun along NH4..vrrooommm

Its a delight to be at the right and happening place at the right time. My friends and I were determined to savour all the delightful moments of a peak season at a tourist spot, and chose the "Christmas" @ Goa. Where else would one like to be during Christmas?
The cab from Bangalore moved slowly forward without an accelerating sound. Those missing the vehicle's roar must know that the vehicle moved as we five guys had to push it forward to start it. :) Thus started the eventful journey to our dream holiday destination, Goa.
The thoughts of 'Goa' would flash 'Beaches', 'Europeans', 'Sea food', 'Beer', 'Party', 'Music' and 'revelry' to the mind. My mind started weaving webs of celebration and partying we would have during the 2 days planned.An 18 hour spine breaking journey along the NH4 through karwar took us to Anjuna palm guesthouse at 4.40 am where we had made bookings for our stay. We, the honchos, could manage to get accommodated in a dorm where we shared rooms with some foreigners though we had made advance booking before a month. As bachelors, we did not have any concern in staying in a dorm and what more does one requires for their temporary stay at a tourist spot. Also it did not feel like an alien place as the house owner and family were very warm and friendly and made us feel 'at home'.

Mullu took the role of a navigator and guided all the way thru' Goa with his little knowledge of the place and making use of the sign boards at important junctions. As a result, we often ended up in taking the exactly wrong direction. As usual it didn't require too much effort for me in switching off the senses which take upon much strain on hectic days except for the eyes and ears which have drawn me to this place with advance planning. With sea food available aplenty and an aversion towards those dead, smelly creatures, I had given rest to my tongue too. 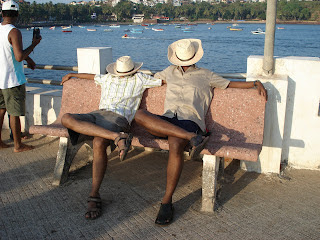 Anjuna, Vagator and places nearby brought me a feeling of coming to alien land seeing foreigners speeding in bikes without wearing shirts giving a hippie(not hip) look, people speaking English and Hindhi in strange foriegn accent and many other scenes which widened our pupil.

Though the time was less spent it was decided to cover all the important places of North Goa hour by hour. We spent half day strolling along the Calangute beach bathing in the Sun at the same time. Mullu had decided to hide his digicam on hearing from locals about the foreigners becoming aggressive and throwing the cams into the sea when they were being digitally shot without permission. We had an illuminated evening when we were in Baga to spend the Christmas Eve. 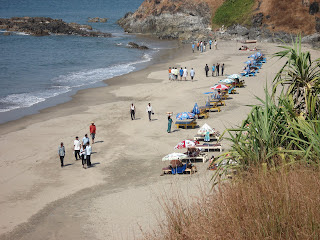 Bathing infront of water.
The final evening became memorable having spent sometime in the capital city, Panaji and going around in a cruise at Miramir beach watching the Goan folk dance and dancing on the cruise.
Posted by Shrinivas at 9:09 PM

I also suspect narayana moorthy giving you money for maintaining orkut and blogdaa...

what about the outcome on ur real intentions for a goa trip???

We learnt about the places there this time..may be next trip we ll execute our real intentions