Recently I installed "Find Device" app on Android phone after watching a security video, never having imagined a situation where I would utilise the features of the app until today.

I was on my way to the bank and while driving on my two wheeler on Road 7 in Whitefield, suddenly I realised the phone was no longer in my pocket. Unable to find the phone nearby I tried to retrace my route in my two wheeler with little hope of recovering the phone as anyone could use my phone since it is not locked. Along with the phone, the phone pouch had an ICICI Debit card, Standard Chartered Credit card and Aadhar card. In the last 2 years since I started using this system of having my cards along with my phone, I had been warned by several of my colleagues of a situation when I would lose my phone and the thief would also have access to my One Time Password(OTP) which is used for validation for any bank/paytm transactions.


On my way back, I informed the security of my apartment community also just in case, I dropped it within my community and they come to know of a lost/dropped phone. Reaching home after an unsuccessful attempt at lost phone recovery, I was reminded of the security apps I had installed a couple of months ago on phone. As soon as I looked up for the feature, google started showing my device around the same area where I realised I had dropped my phone. 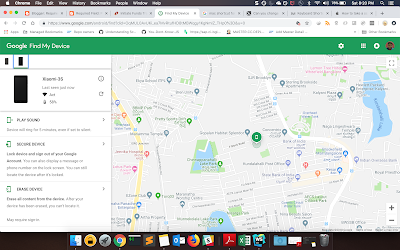 I immediately used a feature to lock my device remotely and set a PIN on the phone. I was also able to ring the phone and send a message to the person who would have my phone. The remote phone ringing feature works even if the phone is in silent mode and rings upto 5 minutes continuously. I sent a message to the device providing a number to call back but there was no response. I drove immediately to the same location where I lost my phone and contacted the security personnel of the companies in that area but they couldn't help. I again returned back unsuccessful, went directly to Airtel to get a new pre-paid card and obtained one after 30 mins of processing.  The customer care personnel said it would take a minimum of 4 hours and maximum upto 24 hours to activate the pre-paid card.

After coming home, I called up ICICI customer care and Standard Chartered customer care and blocked my cards. I was pondering on the idea of reporting to Police station about loss of my phone and Aadhar card along with it but then realised it would be more of a hassle and I would rather forget my phone rather than going through an ordeal of dealing with them. I downloaded a soft copy of my Aadhar card from https://eaadhaar.uidai.gov.in which is as valid as the original card. After a little bit of research, figured that Aadhar card loss does not require an FIR to be filed as it is a common occurrence.  At the same time, now it was a couple of hours since I lost my phone and above site still showed the device at the same location. I thought of blocking my Airtel postpaid connection after waiting for a couple of days with slight hope that the person having my phone would call my back and I need to keep that communication channel open.

At about 4:45 pm in the evening,  my mother suggested that I should go look to see if my phone was lying on the road and no one might have picked it up as I was imagining. I again looked up on the site and saw the device was at a different location, moving toward Seetharamapalya/Hoodi. The movement was not fast and it was understandable that the person is walking towards home after work. At about 15 minutes of following the device over google site, it stopped moving. I was thinking what if the person I'm trying to reach doesn't communicate in English and was thinking of sending a message in hindi. My mother suggested that I should try to send message in kannada and it is most likely he did not know how to attend the call or operate the phone. If the person had no intention to return the phone, he would have turned it off and removed the sim.

I used google translator and sent a message in kannada asking to return my phone along with my landline number. I immediately got a callback on my landline. It was a female voice and she asked me to collect it from near "Ram temple" in Basavanna nagar, Seetharamapalya. I was excited that somebody responded and feeling good about the fact that there is still hope about recovering a lost phone in such a country with so many people. I went near Ram temple and called my phone again, there was a man who instructed me to come further. I told him you could verify from my Aadhar card that I was the same person I was claiming to be. He did not accept the money I gave to him as a reward for returning my phone. All the items on my phone was intact except the fact that the screen was totally smashed and it looked like some vehicle had run over it. The consoling fact is I still have access to all my contacts/apps on my phone and I no longer have to cancel my connection and wait of 5 day time it might take for activating that number again.
Posted by Shrinivas at 8:50 PM

This is actually good to read content of this blog. A is very general and huge knowledgeable platform has been known by this blog. I in reality appreciate this blog to have such kind of educational knowledge. cyber security Brisbane